Hey there Teacups! I’m back today with another Let’s Talk Tea post and this time around I’m going to be reviewing Ruby Lion Blends – Crossbones blend. They very kindly sent me two blends from their current range to try and when I saw the ingredients in this one I knew I had to try it first. Crossbones is a Black Tea based blend with coconut, vanilla and rum. Doesn’t that sound absolutely fantastic! I gave them no information about my favourite kinds of tea or flavours that I like but somehow they managed to pick the most me blend ever. Seriously this is an absolute dream blend for me with the flavour profile it has and I’m so thankful to have been given the chance to try it. 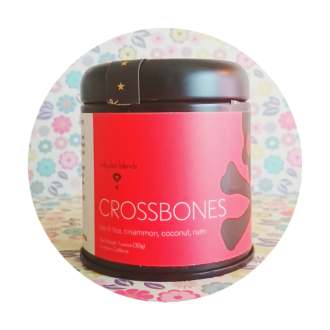 Here’s what Ruby Lion Blends have to say about this blend over on their website: “There’s a rebel in all of us, dreaming of swashbuckling adventures on the open sea, with the wind at our backs, sailing into the unknown. This blend is a tribute to raising the black flag against the challenges of day-to-day life by combining rum-treated* black tea with sweet coconut and cinnamon to give you the courage to get back out there and take what’s yours.

For this blend, we recommend putting 1 Tablespoon of Tea for every 2 cups (or 16 fluid ounces) of boiled, filtered water. Use boiling water around 208°F / 98°C to draw out the best in the Black Tea. Depending on your strength preference, steep between 3 to 5 minutes. Strain the leaves and serve hot, sweetened, or un-sweetened. We enjoy this blend most with milk. *Please note that the Rum treatment used contains Organic Cane Alcohol and Natural Flavours.

Whenever possible, we’d like to show our appreciation to the farmers who grow, pick, and process the Tea for our blends. For Crossbones, we’d especially like to thank the following grower, and showcase some basic information about where the Tea comes from: Grower: Neelamalai Organics, Tea Maker: Murali Subramanian, Origin: Nilgiri, Mountains – Nilgiris District, India, Elevation: 2,000m (6,800ft)”. 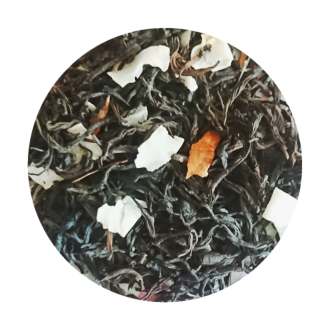 I knew from the description alone that I would love this blend. The overall aroma of the dry leaves is relatively light but I can pick put the coconut, cinnamon and rum clearly. While steeping the cinnamon and rum became a little more muted in the aroma but the coconut became so much stronger so didn’t really know what to expect from it taste wise. I didn’t know if it was going to be all coconut and no cinnamon or rum notes or if it would balance itself out taste wise.

Luckily, taste wise everything seem to balance out perfectly coconut was the stand out note but it didn’t overpower the cinnamon or the rum notes even thought both were relatively subtle. I was worried that they were all going to be drowned out by the robust malty black tea base of this blend but instead they paired perfectly with it making for such a pleasant cup of tea to drink. 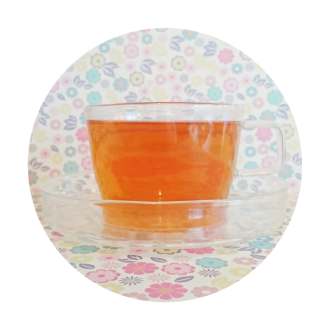 I’ve tried this both on it’s own and with milk and honey and I have to say it’s phenomenal both ways. I will say however that adding milk does mute the cinnamon and the rum notes a little bit so while it makes a tasty latte (both hot and iced), I would recommend having it without milk but with a dash of honey. I found that when I had it on it’s own its was bit drying in the mouth and a little bit astringent in the after taste but once I added honey not only did it take the astringency away completely but it also managed to make the coconut & cinnamon notes much more prominent.

If you’re a fan of dessert teas, black tea, coconut or cinnamon I highly recommend this to you because you will love it. This is one of the best dessert teas I’ve had on a long time and as I said at the start of the post I’m so thankful that I was given the chance to try it. I think this would be a great blend to drink alongside coconut macaroons or a cream tea during the latter months of the year because it’s heart-warming and sweet and I can see it paring perfectly with sweet treats.

If you want to find out more about Ruby Lion Blends or purchase some of their Crossbones blend for yourself, you can do both here. As always if you have any questions at all either stick them in the comments or send them to me on Twitter/Instagram @teaisawishblog and I’ll answer them all as soon as I can.

Speak to you all again soon. Happy Steeping – Kimberley