Hey there Teacups! If you follow me on twitter you will have seen that not to long ago I was invited to a one on one masterclass at T2.

Well October 27th finally rolled around and It’s safe to say that I had an amazing time. In fact amazing would probably be an understatement. Not only because I was in my absolute element but also because I got to bring my fiancé in on the experience as well. We both learnt a lot from our Chai masterclass but from completely different perspectives. It was a really unique experience that we would both like to have again in the future.

So as you will all know by now I am woman who loves her tea. No matter what kind of tea I have its almost a given that I’m going to enjoy it, so you can probably imagine exactly why I am always in my absolute element when it comes to visiting T2 stores. This visit was no acceptation.

Before our masterclass I had no idea what to expect. All I knew was that no matter what it was all about tea so there was no way I wasn’t going to enjoy it. When arriving in store we were welcomed by the lovely team and informed that our masterclass was going to be all about Chai.

Something I was incredibly thankful for. Despite all of the tea that I drink, I am a total newbie when it comes to chai. So this was probably the best masterclass they could have chosen for us to do, and the one I would have learnt the most from.

To start off our masterclass we were given a brief overview of the history of chai  and introduced to a selection of Chai’s that T2 blend and sell. I was pleasantly surprised by how many there were there sheer amount of them made it hard to choose which one we wanted to try first. 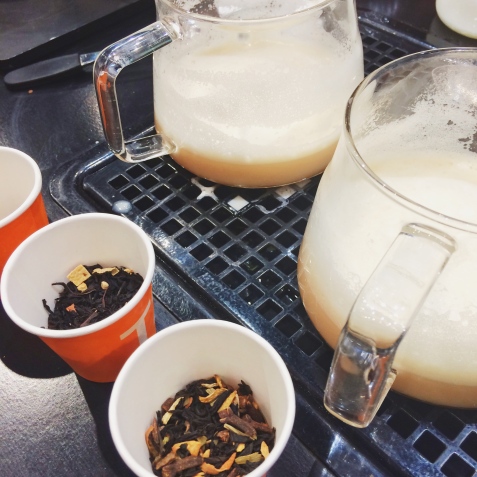 The samples we were introduced to were: Chai (The Classic – Traditional), Organic Chai, Spi Chai ( A Herbal Tisane), Go Go Goa (one of my favourites), Choc Chip Chai (My Absolute favourite),  Honeycomb Chai (So amazingly Sweet – I could drink it all day) and Popcorn Chai.

I have to say that I was so pleasantly surprised by how much choice there was. Of course we went straight for the chocolate chip chai. Which I honestly can’t believe is vegan friendly it tastes so chocolaty that you would think it was filled with chocolate chips.

Traditional Vs Modern – SteepingThe T2 Meadowhall team steeped this chai in two different ways for us. The traditional way  (on the stove steeped in both milk and water) and with a T2 tea maker (steeped in only water with milk added afterwards). I didn’t expect to be able to tell much difference between the two , but oh my god was I wrong! The version that was done on the stove was so incredibly indulgent, creamy and naturally sweet. Chai has such a comforting smell and taste that was amplified tenfold when made this way. The chai steeped in the tea maker we tried both straight and with milk and it just wasn’t the same. Don’t get me wrong it was still just as tasty and flavourful but it just wasn’t the same.

We also added honey to the chai that was done on the stove afterwards and it made the chocolate notes even stronger. Its safe to say that whenever I make chai now I’ll be doing it on the stove. 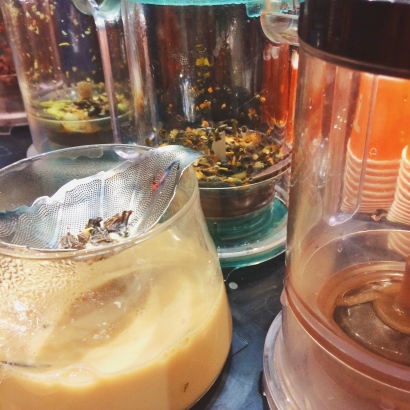 The T2 team also gave me the chance to brew up some Popcorn chai myself on the stove after we were done trying the options the store had to offer and slowly becoming obsessed with chai.

It was a lot easier to do than I thought it would be, and has the best results in the end. Watching the colours change and the smell of chai fill the shop was really satisfying and I’m surprised it wasn’t drawing  passers by in like a freshly baked pie. Popcorn Chai was definitely has a unique taste that was incredibly moreish.

By the end of the masterclass its safe to say we were all chai’ed out with yet another new tea obsession. I’m going to be drinking a lot of chai throughout the colder months and probably beyond.

A quick shout out to T2 Meadowhall for promoting the use soya milk in store – I was really comforting to not have to ask if a dairy free milk could be used for our masterclass. Hopefully your work will show customers that plant based milks are the way forward.

At the end of the masterclass T2 Meadowhall very kindly gifted me with a gift cube of Chocolate Chip Chai (because it was our favourite) and one of their handy infuser balls for easy steeping. 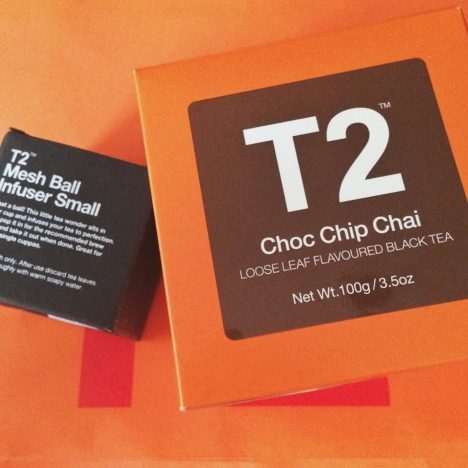 I doubt that this will last two long I’ve been making chocolate chip chai lattes almost everyday since out masterclass! And because I clearly can’t help myself when it comes to T2’s teas and tisanes you know I couldn’t leave the store without picking up some other bits as well.

Of course a box of T2’s chai selfies absolutely had to be part of our haul they were just calling my name after we finished our masterclass I can’t wait to try some of the ones that we didn’t try in our masterclass.  I couldn’t help but pick up some of their candy apple tisane that’s was a limited edition for the Halloween season, and some of their limited edition caramel swirl – Black Tea that I’ve had my eyes on for a while now. I haven’t had chance to try the candy apple tisane yet but the caramel swirl makes insanely good lattes. – You all know me well enough now to know that I’ll have posts about all of these going up in the near future.

A huge thank you to T2 for giving us this opportunity and to the T2 Meadowhall team for being incredibly hospitable and opening us up to the world of chai (we’re a little bit obsessed now).I know it won’t be long before were back. (Keep your eyes on twitter for any updates)As always if you have any questions at all stick them in the comments and I’ll answer them as soon as I can, to the best of my ability.

Have a great week teacups, I’ll speak to you all again soon – Kimberley