Hey there Teacups! I’m back today with another lets talk tea post and this time around I’m going to be reviewing Teakruthi’s – The Vanilla Earl blend. I was very kindly send this blend a few others from Teakruthi to review at the end of 2019 and because of my health being quite bad in the later half of last year I am only just getting round to reviewing them. I’ve not had much Earl Grey so far in 2020 so I wanted to change that and review this one first out of all of the blend I was sent. Vanilla Earl Grey / Earl Grey creme blends have slowly become my favourite over the last few months even over classic Earl Grey so I’ve really been looking forward to trying this since it arrived.

Here’s what Teakruthi have to say about this blend over on their website: ”Tucked away in a secret part of the Ratnapura district in Sri Lanka lies a hidden low land treasure that supports the growth of delectable, high grown black tea. Hand-selected to achieve the highest level of flavour protection and quality, this tea is then blended with the traditional flavouring of the Earl Grey – bergamot oil. Further enhancing these flavours, we’ve added sweet vanilla to create the perfect dessert tea. Reaching a dazzling light copper when fully brewed, this tea will entice you with its sweet, lemon, and floral notes. Pair this with your favourite cakes or simply enjoy its sweetness as a dessert in and of itself”’ 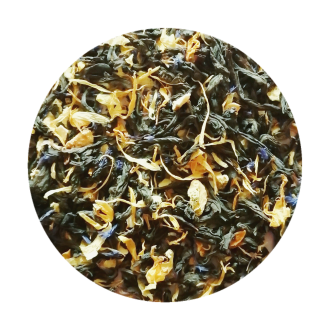 For this tasting session I tried this tea three ways: On it’s own, with just honey and then with honey and milk (all hot). I went into this tasting session thinking that I was going to enjoy this either on it’s own or just with the addition of honey the most because it has a Ceylon base and normally milk with overpower that but I actually enjoyed this the most with milk and honey. The base was much stronger than I thought it would be as was the bergamot which actually did come across as quite overpowering and in turn did overpower the vanilla a little bit. I’m not going to beat around the bush here, I didn’t enjoy this on it’s own, it wasn’t very well balanced, the bergamot was far too strong for my particular taste and because of that I wouldn’t pick out the vanilla in it at all.

The black tea base was present and provided a nice subtle maltiness but not much more because the bergamot was overpowering all of the amazing subtler notes that Ceylon normally brings to the table. Adding in some honey did seem to calm the bergamot and let the Ceylon base shine a little more but sadly the vanilla was nowhere to be found. There is definitely some work that need to be done with the blend to make sure it is balanced enough that all of it’s elements shine, vanilla would have been a great addition to this blend and would have softened the overall feel of it. I love Earl Grey and you all know that by now but even for me the bergamot in this was just to much.

The addition of milk saves this blend and calms the bergamot to a really nice level which in turn allows the Ceylon to shine which I will say I was shocked to see that it it stood it’s ground against the milk as Ceylon normally gets lost once milk is added. Still, no vanilla note was able to come through though and that was the biggest let down of this blend. To see how the addition of vanilla would change this blend I did add some vanilla syrup into it and made a London Fog with it and my god was it delicious and I actually finished what I had left in the bag pretty quickly by preparing it that way. The addition of the vanilla meshed with every other aspect of this blend perfect and I just wish that I was able to taste it in the blend without adding the syrup.

If you’re looking for an Earl grey that you can drink on it’s own that isn’t overwhelmingly strong of the bergamot this is definitely not the blend for you. However if you like to take your Earl Grey with milk and a little bit of sweetener this is perfect for you and makes for such a nice Earl Grey Latte/ Earl Grey Fog. The moral of the story is to never give up on a tea from just one sip, take time to experiment with it and see if you can find a way to make it work for you.

If you want to find out more about Teakruthi and purchase some of this blend for yourself, you can do both here. As always if you have any questions at all either stick them in the comments of send them to me over on Twitter/Instagram @teaisawishblog and I’ll answer them all as soon as I can.

Speak to you all again soon. Happy Steeping – Kimberley

*Tea Tea featured in this post was gifted to me for the purpose of this review. All opinions are my own and have not been paid for*